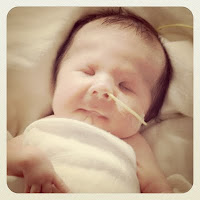 Edward Josiah, 5lbs 10oz, was born April 15th, 2011 at 2:05 p.m.! When the anesthesiologist came out of the "special pediatric room" and told my husband and I that our son was crying, was probably the best moment of my life. We were in shock as we had expected the worst. I started crying and my husband, Adam, went quickly to Edward's side to see if it was true. I, unfortunately, had to stay and get stitched up. Man, I love him sooo much! Where do I begin? So much had lead up to that moment. Now, I am no writer and I don't want to bore you so I will try and leave out as many details as I can.

I wanted nothing more then to be pregnant again! I was in such bliss with my first son that I wanted to experience the perfection all over again. Harvey was born in September and the following July I got pregnant. I was pretty sick for the first 16-18 weeks. During these weeks some ironic things happened.

First, my besty friend, Tyra, told me about her friends who were going through a terrible time. She linked me to their blog and I fell in-love with them and their story affected me to the core. Their son was dealing with a terrible cancer and how they, as parents, were dealing with their sorrow and pain was soo inspiring. They love the Lord and remained close and true to His love even through the death of their son that I was literally blown away. I thought that even though they were going through the worst experience that any parent could ever go through, that Jesus loved them soo much and was going to reward them richly in heaven. To tell you the truth, I wanted Jesus to love me that much that He would entrust me with a hard time. Haha, I even prayed that I could prove my love for Jesus and that I could hold true to His love in a difficult time! Here is their blog if you are interested: http://thematthewsstory.com/

Second, towards the 16-17 week of my pregnancy, around Thanksgiving time, I would wake up super early and read my Bible. One of the early 4:30 a.m. mornings, I was reading in John when all of the sudden the name Edward Josiah popped in my mind. Crazy! I wanted a girl! I looked through the Bible thinking that Jesus wanted me to name my baby a meaningful Bible name. Ok, so I really like Job Issaac. (I still do!) No, it was Edward Josiah that rang so clear in my mind that darn-it, I realized that yes, I was going to have another boy and his name would be Edward Josiah. (Luckily, when I told Adam about what happened and that I felt very strongly that it was not me who gave me the name, that he was cool with the name! I guess if he wasn't, he would have to take it up with Jesus himself!)

Now the pain. My 20 week ultrasound day was upon us! We were sooo excited. It was taking really long and the tech came in and out of the room constantly needing more images. I didn't think anything of it. I was glad because the tech was unable to get a clear shot of our baby's 'goods'. Finally, she made a comment and I realized that something was not right. Adam had left the room because Harvey had had enough. I started bawling, trying to contain myself enough to walk to the elevator and the ride home was brutal. At our appointment with my doctor, she told us that our baby has some problems. He had flexed hands and feet and a small jaw. Her and the radiologist thought that it was probably Trisomy 18. (Trisomy 18's other name is called Edwards syndrome) I had no idea what that was but Adam did and his reaction to 'Edwards syndrome' was so strong that I lost it. I knew it had to be terrible to evoke such a reaction from my husband. So I mourned the potential loss of my baby for a couple days. A couple days later we decided to have an amniocentesis. (Which was a tough decision.) The results came back and thank the Lord it was NOT Trisomy 18! What a glorious day! We were in the clear and our baby was just fine! These findings were nothing!

A month later, December 22nd, a day before we were going to spend Christmas with our family, we had another ultrasound. I was shocked to learn that these anomalies were still present in our baby! WTFreak! In my mind the Lord had healed our baby. I felt like somebody had seriously punched me in the gut, hit me with a bus, pushed me off a cliff. I was angry! I was soooo freaking sad! Bla. We decided to travel and spend time with family to take our mind of off the pain. I barely remember Christmas. I would wake up early at my in-laws and just cry and cry. I barely slept. I was numb. (OMG this is hard to recount.) I am thankful we were occupied though or I would have gone into a depression for sure. I remember that Spartacus Blood and Sand got Adam and I through some hard nights. That is why I am so found of Spartacus! haha

Now, I love Jesus and I know He loves me. Through this all, I feel blessed that He has entrusted me with this struggle. I would MUCH rather have a baby that has problems and loves the Lord then a child who is perfectly healthy and is a beast and does not love Jesus. The Lord has made it abundantly clear that Edward is His and that He has great plans for him. I am not saying that there wasn't times that I haven't asked why? But honestly, why not me?

We kept having ultrasounds every month and at the start of my third trimester I started getting weekly monitoring. Talk about appointments. I should have lived at the hospital.
I had an ultrasound at 34 weeks and was told that he had some swelling.  Doctors wanted to wait it out and have another u/s at 37 weeks. At my appointment at my last ultrasound we were informed that they wanted me to have an mri because they wanted a better read of the swelling. So we scheduled the mri for a Friday but that was cancelled because mri machine broke so we rescheduled it for the following Monday. Then we scheduled a family meeting with all our doctors to discuss our birth plan after the results. Out of the freaking blue they told us that the mri had confirmed that our baby, in addition to everything else, had an underdeveloped chest, lungs, and neck. This was April 12th. They told us that he would most-likely need to be intubated and they needed our permission to do a tracheotomy if need be. They suggested that we go in to be induced the next night. WTFrick! Yet another train blasting over me. By this time I was kinda numb to everything and had the 'such is life' attitude. It really didn't sink in....the doctors were pretty much telling me that our baby might not make it. Due to lack of bed space at Seattle Children's Hospital, we had to wait to go in the next night. So the night of April 14th we went in to be induced. April 15th, I decided that it would make more sense to have a c-section so that the specialists from Children's would be there the SECOND Edward made his appearance. 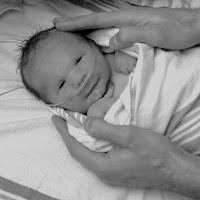 There you have it. Edward has a form of Arthrogryposis. I love him to pieces and am sooo proud to be his momma! I am emotionally exhausted from experiencing that all over again. And I just skimmed through it! Please, if you have any questions or comments feel free to email or whatever. I will go through his condition tomorrow after I have recovered from today!
Posted by Janessa at 1:44 PM

Email ThisBlogThis!Share to TwitterShare to FacebookShare to Pinterest
Labels: Pregnancy