It has been ages since I last blogged!
Well, in fourteen months we have moved twice and been through four (coming up on five) surgeries, and countless trips back and forth to Seattle along with countless casting. That is crazy/tiring to even think about!
We moved. It was definitely an adventure. We were sad to leave but excited to start a real job. After seven hours in the car and a flat tire, we finally made it to our house and did a walk-thru. My pants were soaking wet and the house was filthy dirty. We were sooo upset! I guess the carpets had JUST been cleaned minutes before we pulled up. So we stayed at a hotel that night. After some text messages to the leasing agent, we decided to pull up our sleeves and do some hard labor ourselves. Ugh. It was soo freaking nasty. The leasing agency has been a nightmare. BUT, we love the house.
The Fourth of July was nice. After an ER visit with Edward, he had bloody vomit, I got back home to have fireworks literally in our front yard. I have never been in a city where fireworks are legal.
I feel like so much has happened that I can't even remember.
Recently I have been on a freezer meal kick.
Edward has lost weight and weighs in, WITH his AFO's on, at 11.8 lbs. 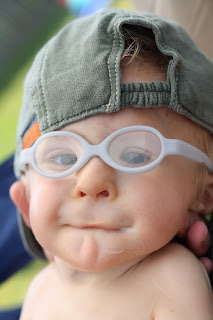 Edwards has had massively hard poops which was the underline cause for the ER trip. The X-ray showed his backup. So he has been on miralax and will most likely be seeing a GI doc in the near future.b
Edward is talking more. Copying more. Has more attitude.
He waves hi.
He seriously thinks he is hilarious.
His spine brace is making weight gain a challenge. That needs to change.